Since I left my home in Montana (slogging through tears, to my father’s embarrassment) I’ve completed the most time consuming trip around the world I’ve ever taken, but oddly also one of the easiest. Even the longest flight flew by, and I never had to deploy my favored method of snoozing through endlessly long international flights: capitalizing on complementary wine.

However, my flight to Tacloban from Manila was delayed due to “congestion at the destination”, which I believe is code for “Tacloban City is having an epically fun fiesta”. The city celebrates Sto. Niño de Leyte Fiesta on June 30th, but the colorful Sangyaw Pasasalamat parade occurs the night before. The whole city shut down for the parade. While I missed the festive costumes and music, I made friends with many other Tacloban-bound passengers waiting in the Manila pre-departure room. I’m a sucker for camaraderie in unpleasant times, so I was pretty tickled.

Don’t know where in the world Tacloban City is? Check out this site to follow the path of Typhoon Haiyan and see if you can find Tacloban!

I took off wandering the next morning, looping through coffee shops recommended to me by Aaron Opdyke, a member of my CU research group and fellow post-Haiyan researcher. It didn’t take long for Tacloban City to mentally melt from an intimidating metro to a very walkable, knowable, friendly downtown. Many shops were closed for the holiday, but in Aaron’s highly recommended Jose Karlos I was perfectly perched to watch colorful umbrellas and balloons bobbing in and out of a busy church. Even Spongebob went to the service. 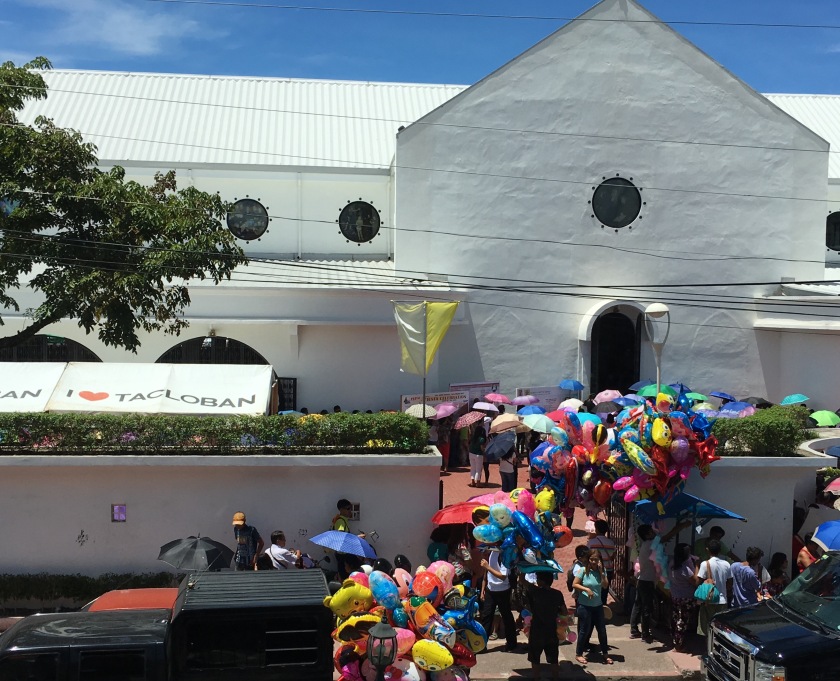 In the afternoon I met up with Ted Jopson, the Assistant Director of the Tacloban City Housing and Community Development Office. Six months ago I hunted down his number and used my Skype credit to call him without warning. Ted was in the middle of evaluating a project on a relocation site north of the city, but instead of rebuffing a stutteringly nervous American girl he kindly gave me his email, and has graciously worked with me since to arrange joining them as a volunteer engineer. Ted and I met on the lawn of City Hall during the inaugural speech of the city’s new mayor, Cristina Romualdez. The ex-mayor, her husband, was joyously smiling nearby, and all of City Hall had poured onto the lawn to listen. Most were dressed up for the occasion, some women were in beautiful silk dresses, and I no longer felt proud of my “modest and professional” decision to wear jeans instead of shorts. Mayor Romualdez spoke on many of her priorities for the upcoming years, all inspiring and necessary, but I felt especially happy to hear her stress the need to develop prerequisite infrastructure at relocation sites (instead of just building basic houses) and continue to strive for risk reduction through innovative urban planning techniques, foreign and homegrown knowledge, and scientific and engineered measures.

After the ceremony, Ted ushered me around the City Hall crowd, introducing me to every department head he could get his hands on, and plopped me down towards the front of food line. I’m quite convinced I couldn’t have a more friendly professional host. We ate our meals with members of his team and I began to grasp responsibilities of the office, including my duties in the coming months. Immediately after the meal I returned to my hotel to Skype with my predecessor, Marc Pons. He’s also and engineer and also a volunteer for the office, but newly returned to Spain after a year in Tacloban. The idea of even beginning to fill his shoes is daunting, luckily they’ve mostly cornered me into wastewater treatment. He worked tirelessly with the city government to build and communicate the vision for Tacloban North. He’s one of the primary local champions for slowing housing construction until supporting infrastructure — roads, drainage, water and wastewater management, power — are established in harmony.

Marc explained that the city wants to establish a community, not just build houses in Tacloban North, and towards this end they are developing a city center with fire and police stations, a town hall, market, etc. My primary work will focus on designing wastewater treatment for the city center. Anaerobic baffled reactors and planted gravel filters are the methods of choice, so I’ll be tailoring an ABR design to fit the needs of TN Central. After that, I’ll pivot to a feasibility study for a connected, centralized collection and treatment system for the Tacloban North area as a whole. Tacloban North is a very large span of empty land 30-45 minutes beyond the main downtown area. A dozen relocation sites are planned for development, but they are distant islands of settlement. Constructing a centralized system might, potentially be irrational. But Marc, Ted, and the team at the Housing and Community Development Office believe digging up roadways in 15 years to lay piping would be truly ludicrous.  If ever, now, is the time to thoughtfully construct a centralized system, without concrete or urban buzz in the way. For a project like this, even a simple feasibility study is far from simple, so I’ll work on a rough sketch of what such a system might look like, and what resources might be required to get the job done.

If you’ve made it this far Thank you! I realize that I’ve tossed a handful of personal details into a vacuum empty of adequate explanation for why here and why now. Check back soon to learn more about Tacloban, recovery efforts to date, and the general plan for my five months.

One thought on “67 hours later, Tacloban!”